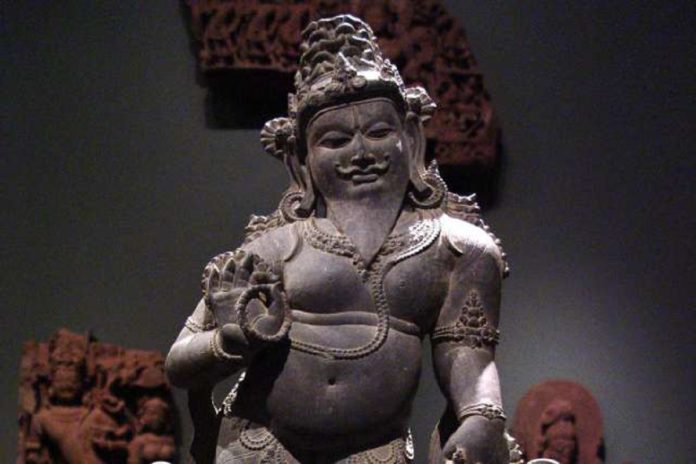 Yesterday,
some people of this town
said about me,
she is the woman
of that man from the seashore

where great waves break
on the white sands.

Friend, his seas swell and roar
making conch shells whirl on the sands.
But fishermen ply their little wooden boats
unafraid of the cold lash of the waves.

Look, my bangles
slip loose as he leaves,
grow tight as he returns,
and they give me away.

The bare root of the bean is pink
like the leg of a jungle hen,
and herds of deer attack its overripe pods
For the harshness
of this season of morning dew
there is no cure
but the breast of my man.

Where the white waters from the peak
crash through the mountain caves,
it flowers on the slopes;
and there, the little hill-town chieftain
has a younger daughter, a girl
with great arms, and she is tender as water;
fancy her quelling my fire!

My lover has not come back:
the jasmine has bloomed.
A goat-herd comes into town
with goats and milk
to take some rice to others
waiting outside,
palmyra rain-guards in their hands,
herds of young ones in their care:
in his hair
nothing but buds of tiny jasmine.

About Sangam Poems : (by A.K.Ramanujan)

“Tamil, one of the two classical languages of India, is the only language of contemporary India which is recognizably continuous with a classical past”.

“These poem are ‘classical,’ i.e., early, ancient; they are also ‘classics,’ i.e., works that have stood the test of time, the founding works of a whole tradition. Not to know them is not to know a unique and major poetic achievement of Indian civilization”.

“In their antiquity and in their contemporaneity, there is not much else in any Indian literature equal to these quiet and dramatic Tamil poems. In their values and stances, they represent a mature classical poetry: passion is balanced by courtesy, transparency by ironies and nuances of design, impersonality by vivid detail, leanness of line by richness of implication. These poems are not just the earliest evidence of Tamil genius. The Tamils, in their 2,000 years of literary effort, wrote nothing better”.